Vikram Jayanti: Research for my film about the spoon-bender’s 40-year career as a secret psychic operative turned up some unlikely facts 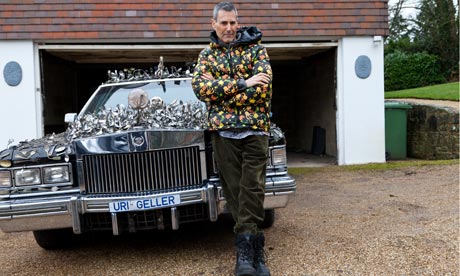 With the news of America’s National Security Agency’s massive electronic surveillance operations dominating the headlines right now, the documentary film I’ve just made for the BBC about spoon-bender Uri Geller’s long and secret career as a psychic operative is timely in ways I never expected.

My journey, as I searched for corroboration of the rumours (and the heavy hints dropped by Geller himself) about his services to the intelligence communities of three continents, took me into a strange alternative reality, populated with men (always men) from the CIA, the FBI, Nasa, Britain’s Ministry of Defence, and yes, the NSA that everyone’s talking about this week. (I’ll say nothing of Mossad, though Israel’s legendary intelligence agency kept cropping up.)

As I crossed the US with my crew, from New York to California via Florida and Texas, an interview at every stop, I learned first hand about how these guys – ranging from cold warriors to the covert operatives engaged with the post-911 war on terror – will leave no stone unturned in their urgent hunger for information, any information, even the rawest and most oblique data, from whatever sources they can find. Whatever might work, and by whatever means.

As those who saw the movie The Men Who Stare at Goats (starring George Clooney, Jeff Bridges, Kevin Spacey and Ewan McGregor) or read Jon Ronson’s book of the same name (which inspired the movie) know, the US military ran a secret programme for more than 20 years training dozens of psychic operatives in “remote viewing” at Fort Meade just outside Washington DC. Fort Meade is better known as the headquarters of the NSA.

Remote viewers were expected to be able to see things thousands of miles away, for instance looking inside a Soviet military installation and drawing what they saw, for CIA and others to analyse. The people running the programme believed this was a skill that could be taught, and that anyone could do it. The programme ended, officially, in 1995 and in 1997 Bill Clinton declassified much of its associated paperwork. (Thank heavens for the Freedom of Information Act.)

Well, it turns out that the inspiration for this multimillion-dollar experiment was research conducted at the beginning of the 70s at California’s Stanford Research Institute, frequently a front for CIA-funded experimental programmes. And at the heart of their research was a young Israeli soldier, called Uri Geller. The hunt was on, to militarise the paranormal.

We use footage from the CIA-funded film record of the Uri Geller experiments, and we then track stories about Uri’s involvement in events ranging from the Israeli commando raid on Entebbe through to his participation in the search for Osama bin Laden, with a mysterious sidebar as a federal agent for the Mexican government. Forty years of psychic operations.

In the film, someone well positioned to know suggests that rather than being shut down in 1995, the use of psychic operatives by the US government and military has merely gone “deeper black”. If that’s the case, then perhaps Geller is still at work in the shadows.

Vikram Jayanti is a film-maker with credits including The Agony and the Ecstasy of Phil Spector and the Oscar-winning When We Were Kings. He and Geller will be appearing at the world premiere of The Secret Life of Uri Geller – Psychic Spy? at Sheffield DocFest at 4.30pm on Thursday 13 June. BBC2 will broadcast a one-hour version of the film later this year